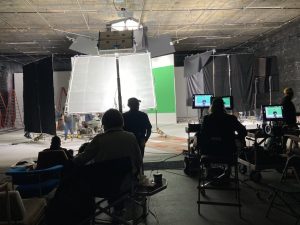 Picture you’re on a set for a commercial shoot. It’s a “video village” collection of director’s chairs and monitors. 36 professionals from makeup, hair and wardrobe to teleprompter & script editors to ad agency folks to the photography team to the director hover over their respective domains of production.

Such was the background for my week of coaching the talent on set for this large tech company.

The action starts. The talent begins to share his message. And… then… everything comes to a dead halt.

The two producers, zooming in from Seoul, say, “We don’t like the talent’s ankles.”

They go on to comment, “The focus needs to be on his face and his content, and we are distracted by the half-inch of revealed ankles between his loafers and the European cut pants.”

What’s this have to do with you?

You’re probably not doing video shoots with 36-people production crews, BUT you are communicating as a leader all the time… AND DETAILS MATTER.

The rest of the commercial.

Our video production stops for 55 minutes! Big discussions are held between the wardrobe people, the ad agency people, the on-set director, and the producers in Seoul.

My talent puts on a pair of socks.

Guess what? It was the right move. Your gaze never goes down to the guy’s feet (even though you never realize that his ankles cause a distraction).

Don’t get me started on how much time it took to select the pillows on the background couch.