What Can Politics Teach You about Sales? 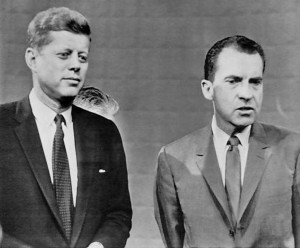 Kennedy arrives in Chicago rested and tanned. Nixon shuffles in with 102-degree temperature and nursing a knee infection having caused him to lose weight and look gaunt.

Each are asked if they want any make-up. Nixon and Kennedy decline and Nixon’s crew hastily applies some “Lazy Shave” over-the-counter cosmetic to cover his famous five-o’clock shadow. Out of Nixon’s view, Kennedy’s team gives him a full cosmetic touch-up.

According to the excellent research of Leonard Mlodinow in Subliminal: How Your Unconscious Mind Rules Your Behavior Nixon came out ahead in this debate IF YOU LISTENED ON THE RADIO. His content and knowledge of topics surpasses Kennedy’s.

What politics teaches you about sales:

Karen Cortell Reisman, M.S., author of 3 books and President of Speak For Yourself®, works with organizations and executives on how to communicate to make more money. It’s all in how you speak for yourself. Read more at www.SpeakForYourself.com/blog/