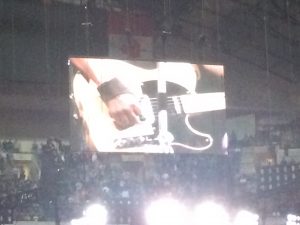 The Boss, aka Bruce Springsteen, mesmerized a sold-out crowd of all age groups, during his recent tour stop in Dallas. We stood, danced, sang along from 8pm to almost midnight.

You’re not Bruce, and even though you’re successful – you’re probably not earning over a million dollars a day – BUT learn from The Boss. He KNOWS how to communicate to sell – his concerts, his t-shirts, his music.

Customize – Our crowd roared when he screeched, “Daaaaallllllaaaaas!”. That’s NOT a lot of customizing, but we loved that he acknowledged our town. And, in this past week, Bruce & The E Street Band opened the first of two nights at Brooklyn’s Barclays Center with “Purple Rain” in tribute to Prince. Customize to your audience and to current low hanging fruit.

Exceed value – Usually a concert begins with a warm-up act. And the main act is less than two hours. Not the E Street Band. You got these professionals for almost FOUR HOURS! Amazing. Exceed value – give more than expected/needed.

Smile – Seems easy enough. But wait. You may be exhausted, stressed, have an ingrown toe nail. It’s hard to project a smile that’s authentic all the time. The Boss. and gang, smiled ALL NIGHT LONG even while singing. And they have every reason to be exhausted. They do this performance every other night and travel to the venues all over the US.

Create buzz – You may or may not be famous. Doesn’t matter. You have to communicate your energy and passion before, during and after your presentations. The E Street Band brings their brand with them. You must too.

Deliver – Let’s not forget the content. Present your expertise. What I found most compelling about Bruce that night – he sang an entire album first created in the ‘80s but as he said, “from a different and perhaps wiser perspective.” You speak with gravitas about that which you know about and have earned the right to talk about.

Springsteen’s skill set has kept him front and center stage for over 30 years. Learn from the best on how to communicate to sell and grow your business.

PS: Thank you to Beverly Bonnheim for asking me to go to this concert and dance till midnight at the American Airlines Center. I still have a Bruce Springsteen hangover.

Karen Cortell Reisman, M.S., author of 3 books and President of Speak For Yourself®, works with decision makers on how to speak with gravitas. It’s all in how you speak for yourself. Karen also speaks about her cousin, Albert Einstein, in a message about hope, resilience and brassieres.