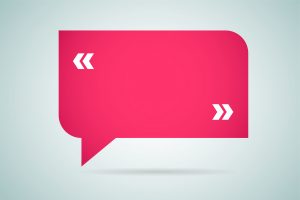 “First, two announcements,” my friend Michael Gallant said as he eulogized his mother-in-law last week. “1. If you’re here to eat doosies* … we are not serving them after this service so if that’s why you’re here you can leave now! And 2. Neimans is closed for the day. And the St. Johns department will now be closed forever.”

The crowd laughs and he pauses. Gallant continues…

“Ruth never attended a family function that she couldn’t ruin. [He pauses] BUT she believed in me. Early in my career when I had an unexpected job transition she backed me when I started my own business. [Gallant’s voice cracks here] She believed in me.”

Michael Gallant and Ann Zimmerman Gallant are master speakers and there are three lessons you can learn from them about writing/giving eulogies AND writing/presenting any speech.

The first rule I call “bing,bing, baboom” – you do a list of three items, the first two being similar and the third item is the unexpected twist. Usually the first two items are serious and the third item is the funny stuff. Example: The world is a challenging place these days. Politics are polarizing, there’s unrest in the Middle East, and the Kardashians just announced the renewal of their reality show. Michael does the reverse. Two funny statements followed by a serious truth. In the audience, we are surprised and we are all in.

The second humor rule comes from Ann’s speech about her mom – do a set up with the perfect amount of detail followed by a deadpan punch line.

“She was a woman with big appetites – she bought St. John’s by the pound, drank a magnum of Kettle One once a week and shipped us 12 pounds of rugelach** overnight every few months. She had an entire basement filled with coats – fur, cashmere, raincoats, you name it. Michael said we could open a store, but we would have to call it ‘Size 8’. [pause] And that kids, is why there will be no inheritance.”

Michael and Ann share difficult info, from the heart, about a complicated woman who suffered from Borderline Personality Disorder. For you that means – be authentic. Tell the truth. You will gain credibility and trust from your audience.

Both Ann and Michael master the power of the pause. It makes sense but pausing is hard to do. When you give presentations any silence from the lectern feels like an eternity. It isn’t. Tip: in your speech notes, add the word [pause] into your script and when you get there…. Stop! Silently count: “1001, 1002, 1003” and THEN start talking again. You will add drama and depth to your message.

*Doosies – a delicious triple-decker small sandwich made with corn beef, pastrami and sometimes with cheese on skinny party rye bread with mustard and thousand island dressing. These sandwiches are to die for, and, well, they are often served at funeral receptions where I come from.

**Rugelach – pastry made in the form of a crescent by rolling a triangle of dough around a filling. I could live on this particular rugelach.

Karen Cortell Reisman, M.S., author of 3 books and President of Speak For Yourself®, works with decision makers on how to speak with gravitas. It’s all in how you speak for yourself. Karen also speaks about her cousin, Albert Einstein, in a message about hope, resilience and brassieres.